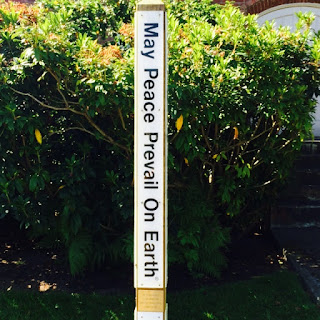 Empires come and go like a
dark-rooted perennial blossom,
savage winds of vengeance and retribution,
disfigured honor and overblown causes
wreck upon the pyre of human possibilities.

Mothers have lamented
over the staggering breath of generations,
the premature loss of husbands and children to
shrill reverberations of the macabre dance of war.

Impoverished billions of hapless souls
sift through the detritus of progress
in an attempt to draw sustenance
from stone.

Cycles of needless suffering
continue,
will to power drones on
erecting palaces among the
bones of the living.

Stark brilliant testimonials to the
ustry of greed and ambition
rise like majestic spires
from a planet made feeble by ifference.

Ideas that need to be forsaken
still thrive.

Crimes against humanity
perpetuated in the name of the
god of the moment.

Cities are razed by
marvelous weapons of
insidious destruction
in the twisted hope that
rivers of blood can be used
to craft victory
without killing the soul of
those who prevail above the carnage.

Humanity is marching with
iberate precision in a parade
that leads to a fiery cauldron of despair.

Humanity is dancing to a
rhapsody that inspires the
self-immolation of the human spirit.

Humanity is the rudder of a
magnificent ship that is poised at the abyss
with its sails billowing in a
tumultuous breeze filled with brimstone and fire.

Many voices call out from the centuries
though they can barely be heard
above the raucous cacophony of war,
they are joined by those still living
enfeebled by abuse and neglect.

Littered among the dead
lay the corpses of those
impaled by the reckless sword of
ignorance and twisted logic.

In spite of all the obstacles,
all the crazed ifference and
the barren vision of ideologues who
see nothing but the fruits of
extreme and impossible ideas,
all the pointless babble of material progress,
all the hollow ideas grown gravid
with the lure of profit,
all the smoke and mirrors,
the call for a peaceful world
can still be heard.

Only peace can unshackle the
spirit from the bonds of history,
only peace can save human kind from the
limits of its own conclusions.

Posted by Joseph Aprile at 8:43 AM No comments:

Caught within the Fabric of Time

Caught within the
fabric of time,
embedded in the matrix of
earthly endeavor,
wrapped inside the
kaleidoscope of pleasure,
treadmill of pain,
we hunger for each other,
yearn for the
dawning of clarity,
hapless virgins of the clothesline.

The enclosure so
cleverly crafted is
occupied,
battalions of idle hungry hearts
roam the landscape
seeking answers to
nameless questions,
a rock upon which to hang
the core of elusive existence,
extruding meaning from
insubstantial air,
anticipating the dreaded arrival
of the interminable silence.
Posted by Joseph Aprile at 6:56 AM No comments: